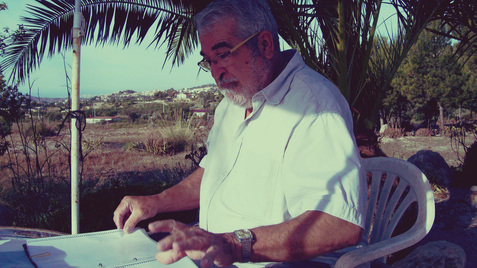 It isn’t easy to describe the story of the personality of this tenor, many-sided as he is, in a restricted area like this. To his passion for music you have to add his intellectual schooling (philosophy, psychology, social pedagogy, etc.) to which he added the studies of the great modern thinkers (J.P. Sartre, Simone de Beauvoir, the Frankfurt School with H. Marcuse y E. Fromm at the head, etc.), always searching for the liberation of a reactionary and repressive education that led him into exile of more than twenty-five years in the Netherlands. On doctors advice he returned to his native country.

He started to write poetry in Spanish as well as in the Dutch language – the last opened the doors for him to the Guinness award (a right he didn’t want to use), because he was the first Spanish poet who wrote originally in that language.

When he retired from his institutional career and came back to Spain. Everybody was amazed by the reflective and critical capacity of this tenor, when he founded the association “OLGA”, the organisation against bullfighting and filled streets and cities with gigantic bill-boards that denounced the cruelty of that what, unjustly is called “Fiesta Nacional” (national feast celebration). These activities formed the base of the actual big movement against bullfighting, at a time in which most of the world was convinced that every Spanish person was a “bullfighter” and that everybody enjoyed these cruel events. Afterwards Sociological studies would demonstrate the opposite.

He gave lectures about Sigmund Freud’s psychoanalysis, the social philosophy of Herbert Marcuse and the humanistic psychology of Erich Fromm. Together with the psychiatrist María Victoria Soler, he ran a course in Psychiatry for the therapists of the “Proyecto Hombre” (project of the human being), and appeared on television and radio. Sometimes, he says “I sing to honour love as strong and as loud as I can”, to promote the dialogue between people.

He strongly dislikes the ruling hypocrisy between the politicians and the absolute power of religions, that keep people silent and innocent, using words that they’ve appropriated without any right, like “truth”, “progress” and “freedom”...and at the same time they still keep an “undermining” censorship.
Powered by